The Golden State Skyline is a human-powered, self-supported linkup of all fifteen 14,000’ peaks in California, stretching from Mt. Shasta in the Cascades to Mt. Langley, the southern tip of the Sierra. Along with my friends Jonny Morsicato and Charlie Firer, followed by film crew Colin Rex and Nick Smillie, I set off to complete the Golden State Skyline on August 14. Our planned route covered 800 miles by bike, 100 miles on foot, and 100,000 feet of vertical gain, including technical difficulties up to 5.9. But life had other plans… 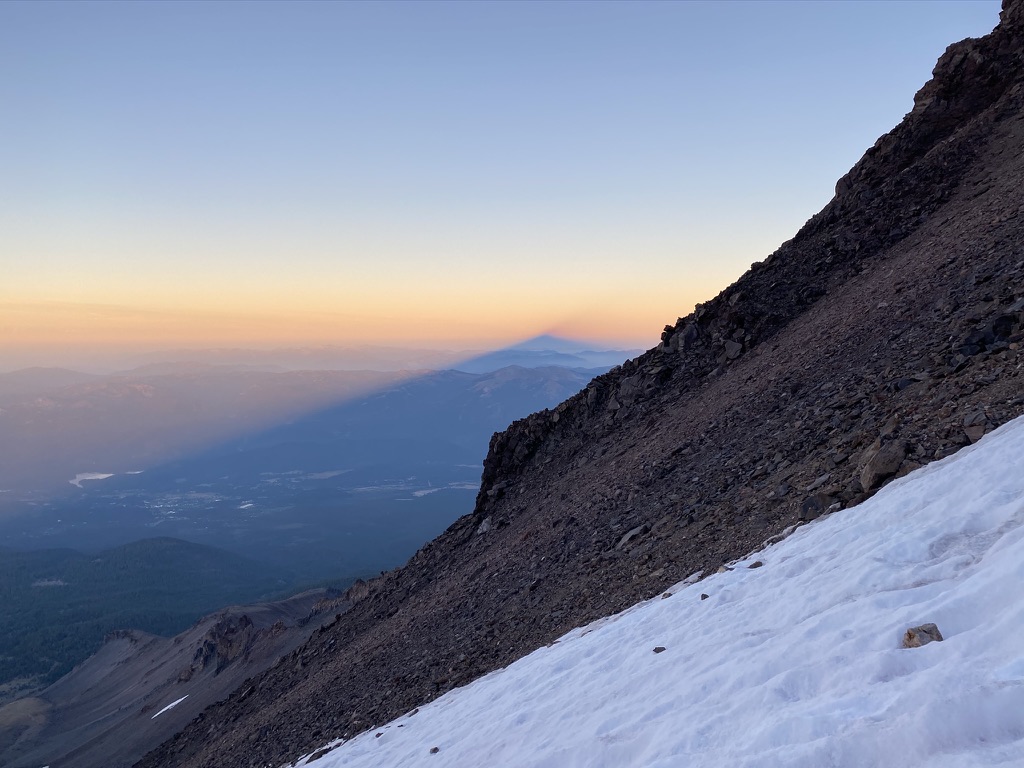 3:00 AM Start! We dragged ourselves out of our bags after a few hours of sleep, downed some coffee and poptarts (premium fuel only), and hit the trail, lightly jogging towards the hulking mass of Mt. Shasta, a massive Cascade volcano that happens to be the northernmost 14er in California. We had the mountain to ourselves, and soon found out why: when the snow melts off the flanks of Shasta, the horrific talus below is revealed. We navigated 7,000 ft. of the loosest, sharpest rock I have ever had the displeasure of sliding down, with some bullet-hard snow and cliff bands thrown in for good measure, before reaching the summit. The slog turned out to be worth it, as we witnessed Shasta cast its shadow across the barren plains and forests below. We descended to the parking lot into what would become a theme of the trip: HEAT.
At the van, we transitioned for the first bike leg, taking some time to hydrate and pack last minute items on the bikes. As we set off, Jonny immediately flatted, a harbinger of tire issues to come on day 3. We quickly fixed him up and started pedaling, descending a screaming 3,000 feet to the town of Shasta and on for another 96 miles before stopping for the night at a patch of grass near Old Station, CA, with Shasta somehow STILL in our line of sight. 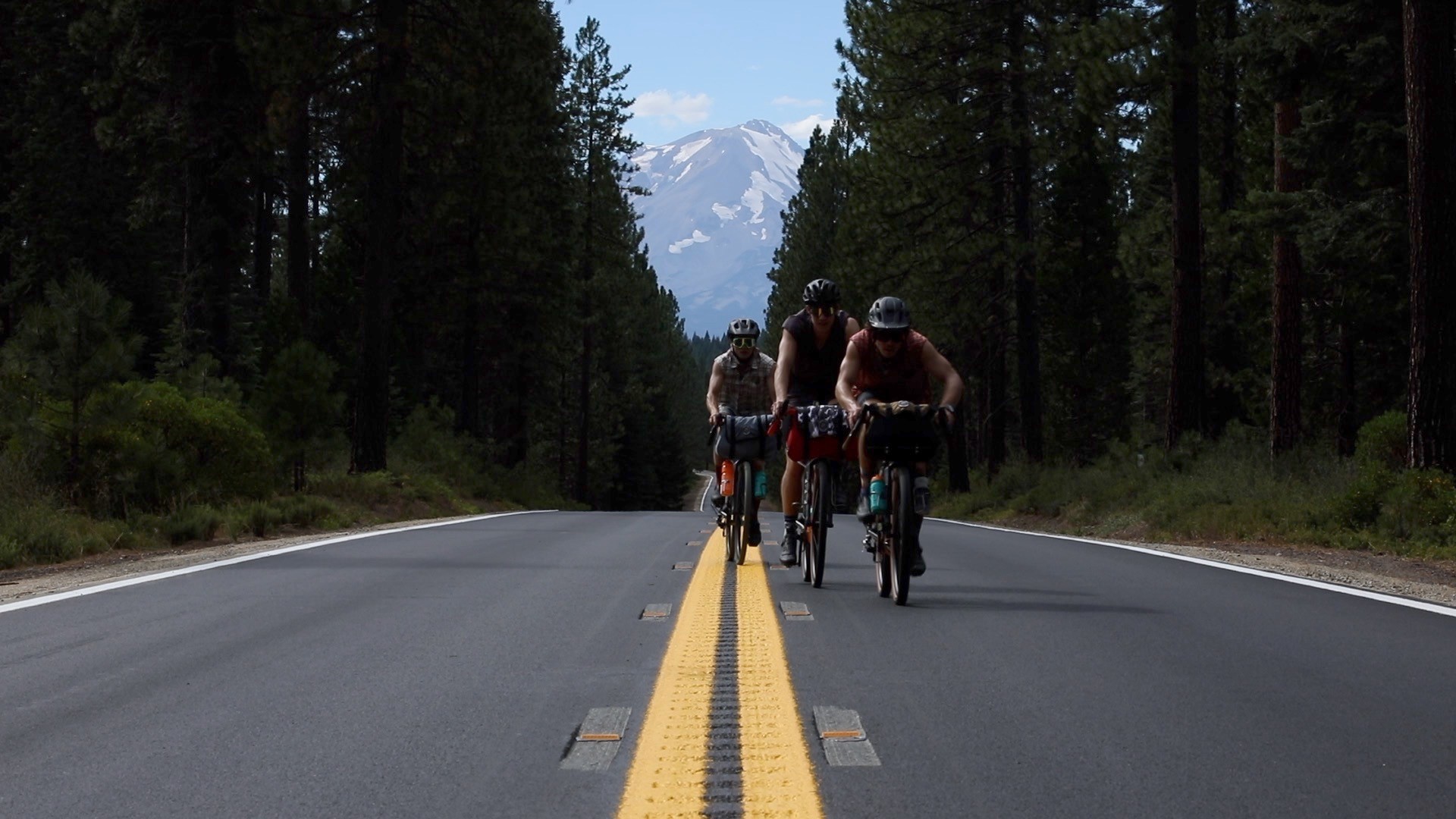 Day 2 started rough, with a ranger rousting us from our grass bivouacs. We had camped behind the visitor center, within 10 feet of a clearly marked “No Camping” sign. Oops. Chalk it up to delirium and weak headlamps. We fueled up with a gas station breakfast at the less-than-friendly Old Station Fill Up, our first real food since lunch on Day 1. We hadn’t accounted for COVID closures of various gas stations and restaurants along the way, and dinner had been rather desperate, dry biscuits and almonds eaten on the roadside. We perked up with caffeine and calories, and were soon on the road, stopping only to clean about 12 pounds of sap off Jonny’s bike shoe; he had somehow stepped in a sap well and became glued to his bike cleat!

The miles ticked away pleasantly, and we pedaled hard into Susanville. After a grocery store stop and a quick nap outside a shady Starbucks, we reluctantly saddled up and pedaled out of Susanville towards Reno, Nevada, right into a historic heat wave. We wouldn’t suffer for long, however, as looming clouds on the horizon quickly made it clear we were in for another surprise: wildfires.

At mile 105, we finally arrived at the northern barrier of the fire flickering on the horizon all day. Past the line of cars, at a wall of orange cones, we stopped our bikes and stared, shocked at the devastation before us. The officer manning the barrier described the chaos beyond, the fire burning over HWY 395, ablating homes and growing rapidly, fueled by the hot winds. We would have to sleep in the juniper trees on the side of the road, he said, and continue through in the morning. We didn’t know it at the time, but this was the beginning of California’s most horrific fire season on record, burning over 3.3 million acres and counting, taking lives and incinerating structures across the state. In 2020, Fire Season quickly became a proper noun, a horrible reminder of climate change rearing its ugly head after years of wanton abuse of resources by the human race. 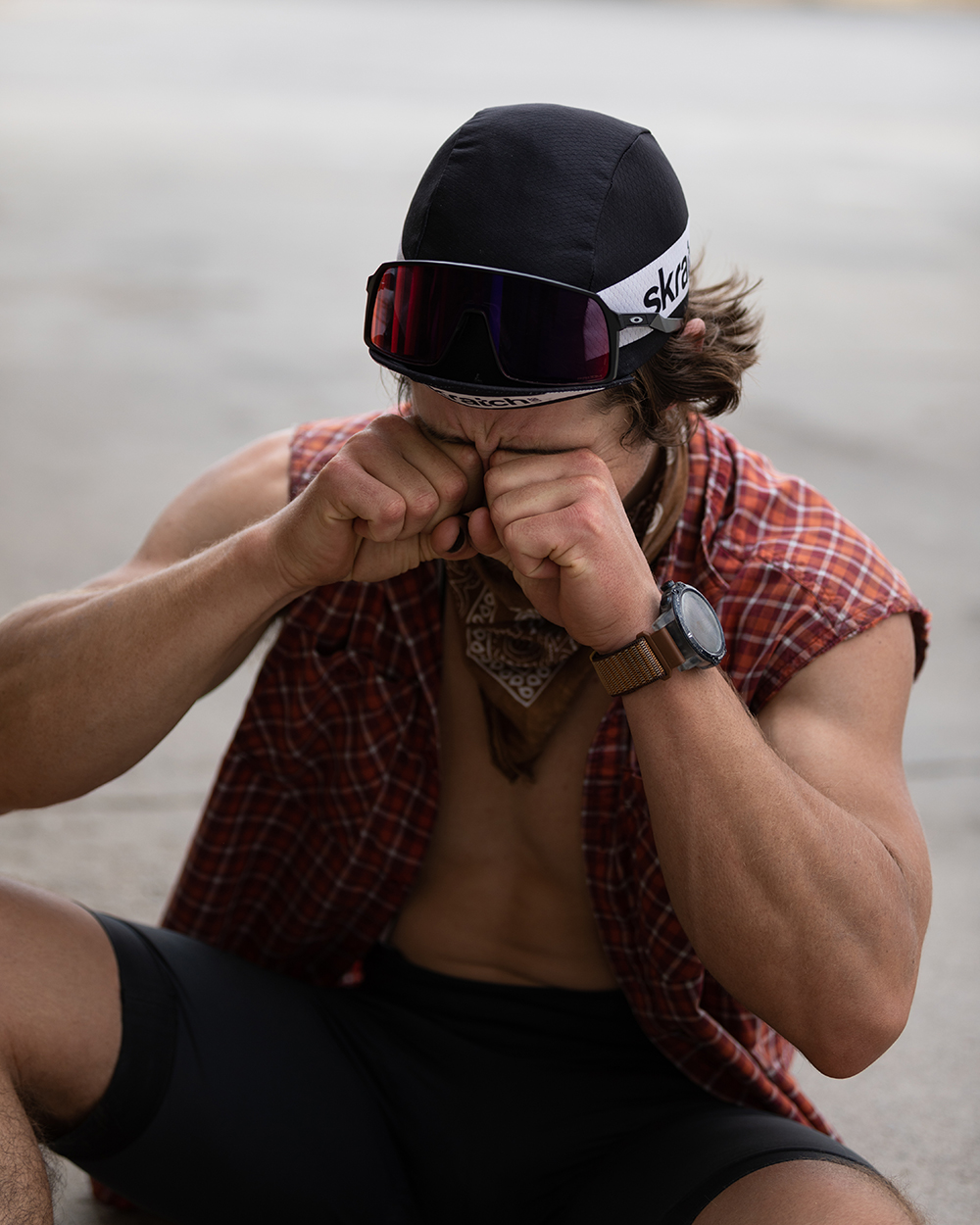 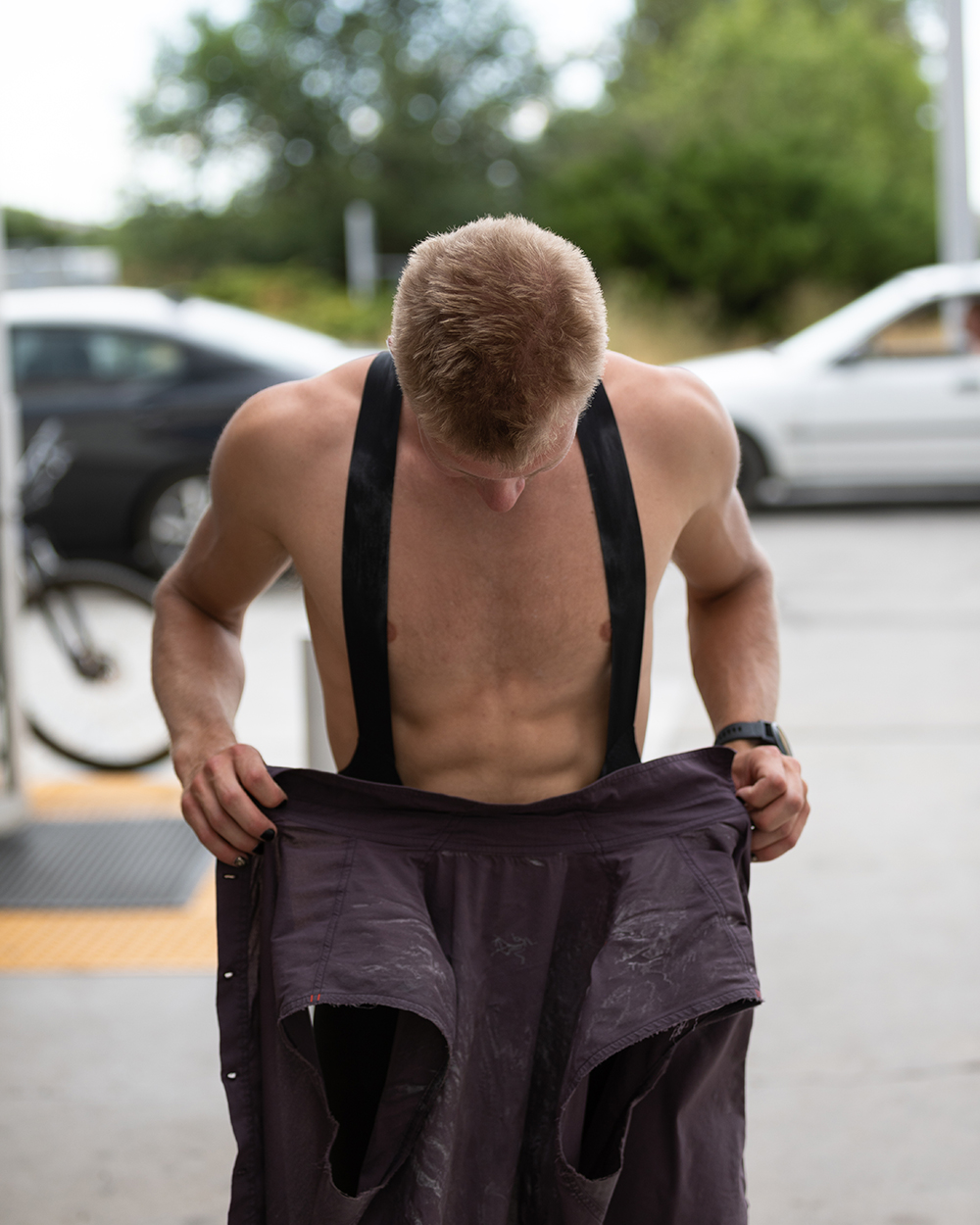 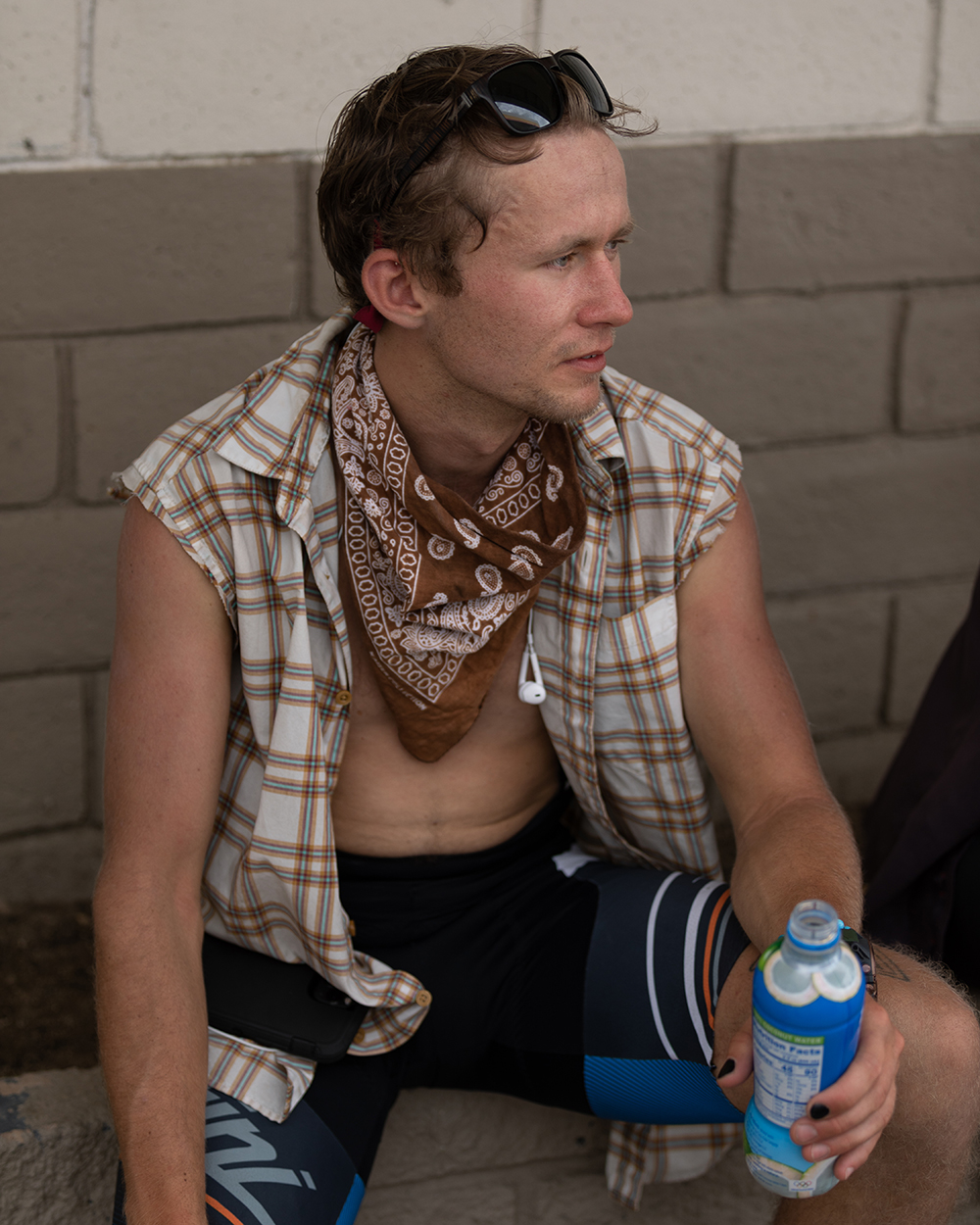 Light rain kept us awake until midnight, when it finally ceased. Unfortunately, the rain was quickly followed by a downpour of ash from the fires burning only miles away, and we awoke covered in gray. The day didn’t really improve from there, turning into a 18-hour thrashing punctuated by brief moments of peace.

With 395 open to limited traffic, we rode through the burn zone, appalled at the charred wasteland that had only days before been bucolic hills, rolling horse country. Smoking fence posts and scared animals dotted the landscape, and we coughed our way through to Reno for breakfast. After a lengthy stop for crepes and coffee, we headed into the mouth of the beast, pedaling south as temperatures soared toward triple digits. As we suffered in the heat, a Nevada State Trooper pulled us over for a “wellness check”, gently directing us to take Old 395 for a less trafficked experience. At the pull off, we were greeted by Sam Skrocke, current self-supported record holder for the linkup! He had been following our GPS tracker, and came down from his home in Tahoe to give us cold drinks and some motivation. He chatted with us a bit about his own record push, where he also encountered wildfires, heat, and more. It was refreshing to interact with someone who knew what we were going through, how much we were suffering. As we drained our cold drinks, he sent us off with some final encouragement, “You guys are crushing it. Keep pushing.” What a boost! The rest of the day was relatively peaceful, with a big climb out of Gardnerville, a joyous descent across the California state line, and an absolutely heavenly cheeseburger from the fine folks at Walker Burger, who stayed open late to feed us, bless their souls.

The day ended on a low note, with a ferocious lightning storm scrapping our plans to make it to Bridgeport. Without rain shelter, we huddled down in a futile attempt to stay dry, eventually giving up and accepting the “shower” as it passed angrily through Walker. Still drying off, we slept on the concrete on Main Street. Oof. 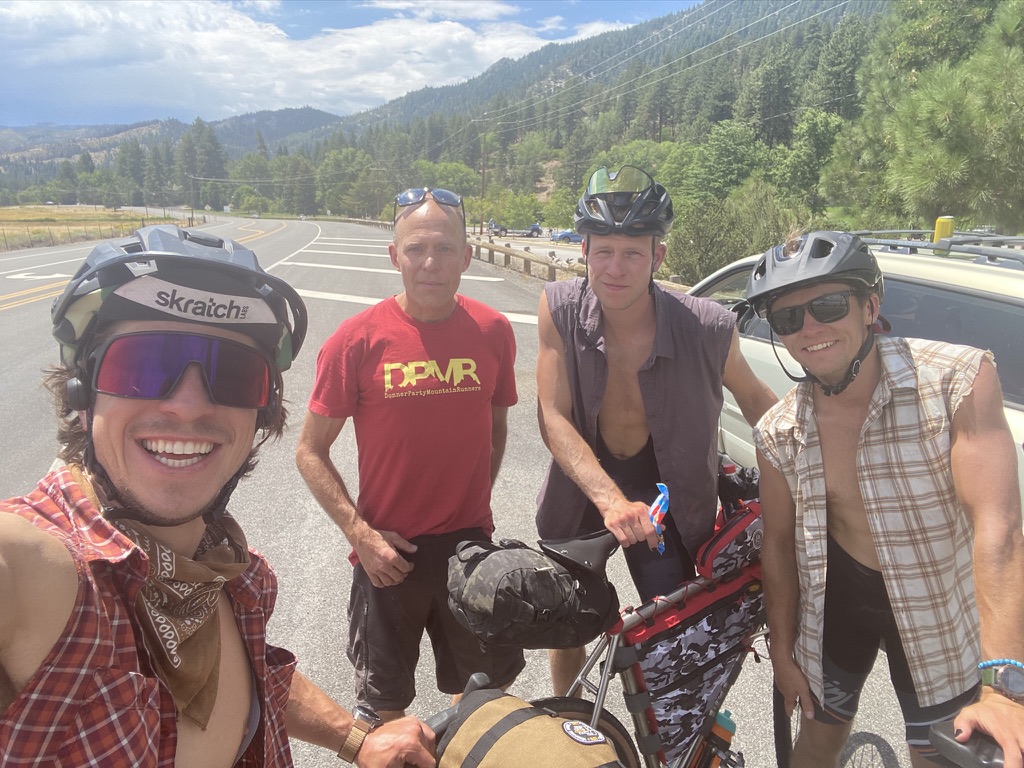 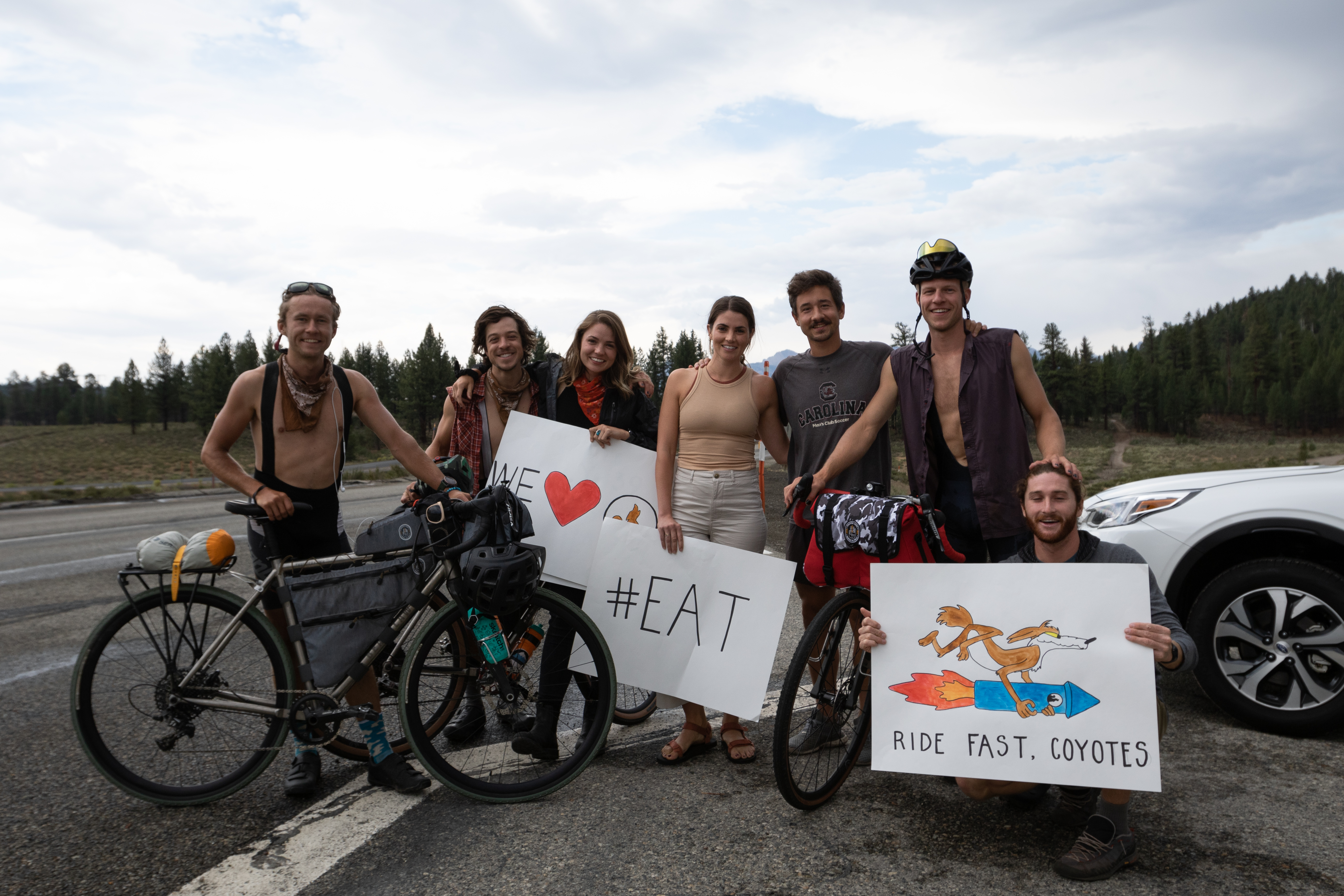 We were behind on mileage due to the fires and storms, so we knew day 4 would be a doozy - we absolutely had to make it to the Eastern Sierra if we wanted to stay on record pace. This would be the biggest-ever bike day for all of us, but we were in the groove at this point, feeling pretty connected to our bikes and pedaling like robots. As usual, life had other plans, dishing out a serious beatdown to Jonny in the form of repeated flat tires. We finally got the flats sorted, and knocked out the 60 miles to Lee Vining, home of the best breakfast sandwich on the east side! Things took a turn for the bizarre here; Charlie and I were a little out of it, and took naps on Latte Da’s spacious lawn while Jonny zombie-walked around the premises.

After a bit of reprogramming, and copious caffeine, we were back on the road, revitalized by our proximity to the peaks we know best. A fast-moving storm walloped us on the climb out of June Lake, but we were undeterred, knowing that a glorious descent to Bishop awaited. In a surprise twist, we were greeted by my girlfriend Claire and a small welcoming party at the Mammoth turnoff. Their hand-drawn signs and positivity provided a tailwind as we wrapped up the climbing and rocketed into Bishop, hitting 54mph on the grade into town, Charlie shouting with joy as we sighted our next peak: White Mountain.

Our enthusiasm was short-lived, however, as more smoke greeted us in the valley. A quick pizza dinner in Bishop was followed by a brutal 20 miles into pitch darkness and building smoke. We turned off onto the unmaintained dirt road leading to the base of White Mountain, pushing our bikes the last mile up the slippery gravel and finally arriving at our cache, chock full of food and climbing gear, past midnight. We slipped into our bags at 1:30 AM, not thinking twice about the scorpions crawling around us. 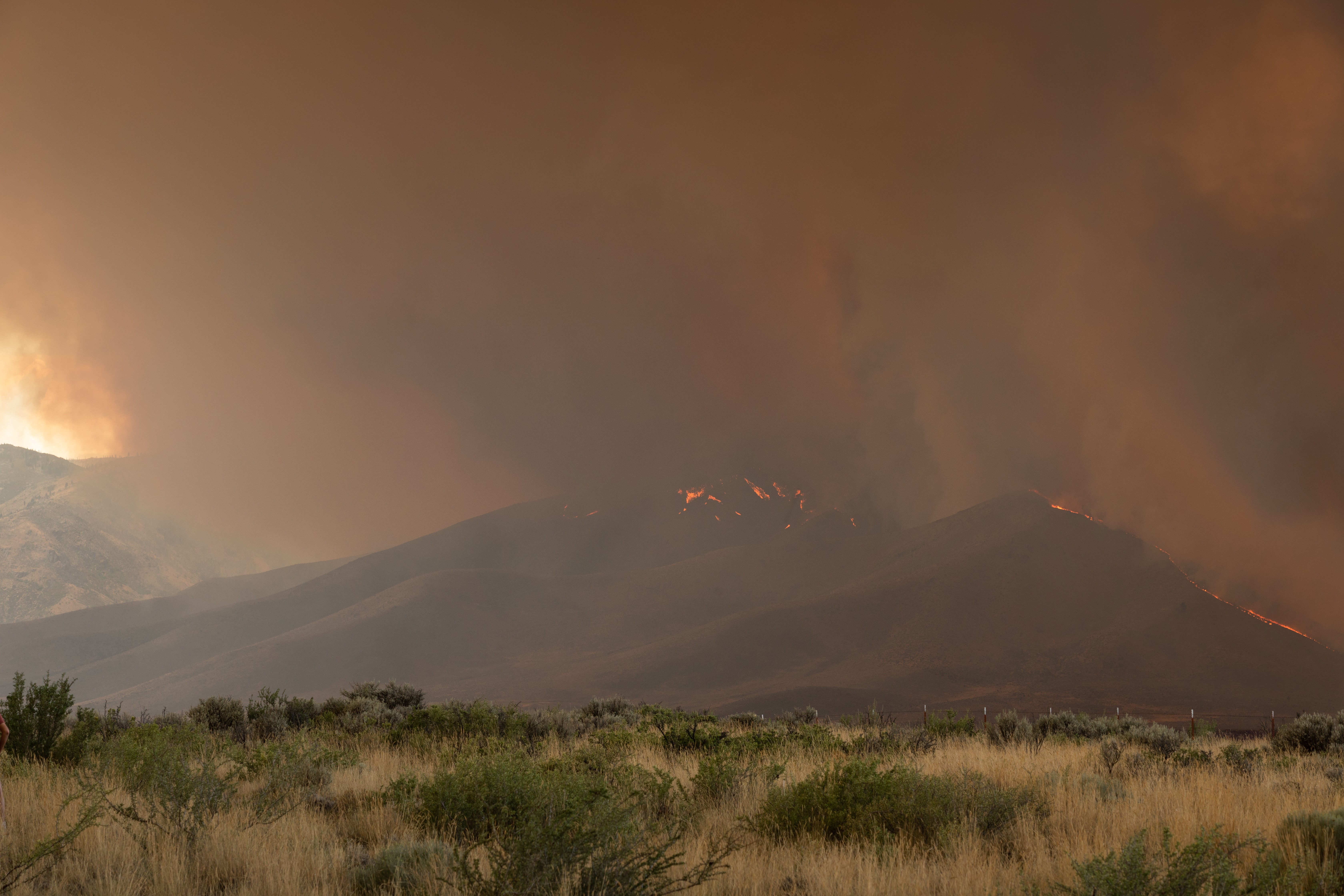 Alarms blared 1, 2, 3 times, and we finally awoke from our slumber. 5:00 AM. Uh oh. We now faced the potentially destructive heat of the White Mountains, a stark range with no running water and sparse vegetation. From the start, day 5 was nothing but hard travel, our “trail” taking us from the floor of the Owens Valley, at 5,000 feet, to 14,000, through cactus, shrub, creosote, and broken rock.

We passed thorough Black Eagle Camp, an eerie, restored mining area with a smattering of cabins poking out of the hillside. We couldn’t resist the temptation to explore the open mines, following the serpentine caves deep into the blasted faces of red and white, the cool underground air a respite from the rising temps outside. Eventually, we continued the trudge upward, but something was already broken. We hacked and coughed, trying to clear the smoke from our lungs, tacitly acknowledging the possibility of defeat, retreat. As we bushwhacked higher up the trailless flanks of White, the summit emerged, feeling about a million miles away, shimmering in the desert heat. At the same time, we watched storm clouds build to the west, stacking over the Sierra, throwing lightning down upon the Palisades, tomorrow’s objective.

Out of water, out of morale, out of breath, we stopped on the shattered hillside and, as a group, conceded defeat. The wildfires, heat, and brutality of the linkup had taken a toll, and we were simply spent, not having any fun, and concerned for our safety on the technical granite of the Sierra. We took one last look at White, with spite, and another at the Sierra and the terrain to the north, from whence we came, with gratitude. 500 miles lay behind us. We had pedaled through fires and heat, passing swiftly through towns and slowly through forests, accumulating tales bizarre and untold and grand. We had failed to complete the Skyline. Yet, in the midst of our emptiness, life still felt Golden. 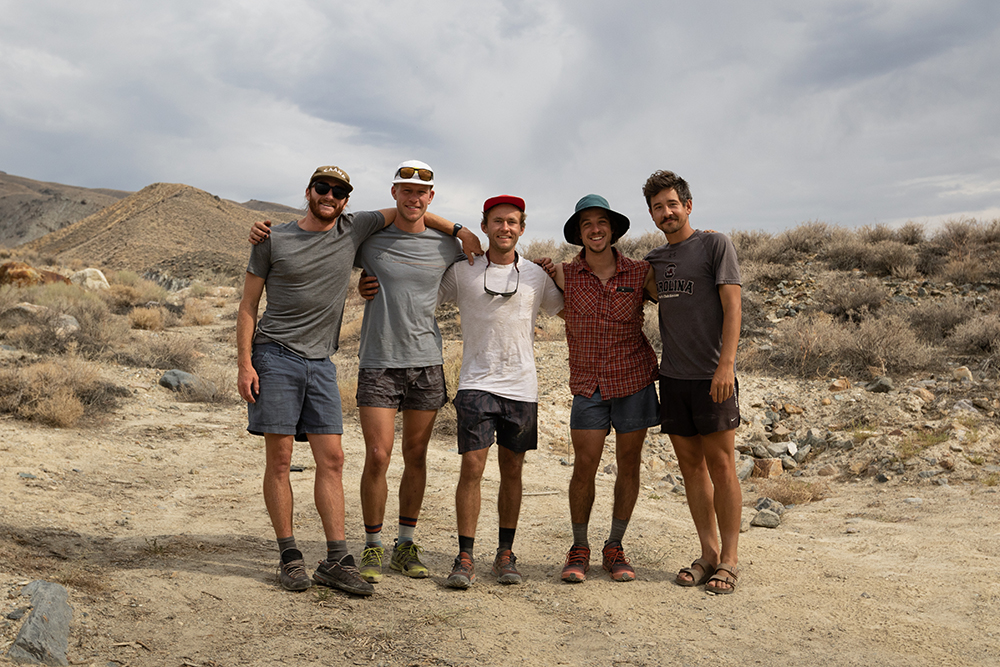 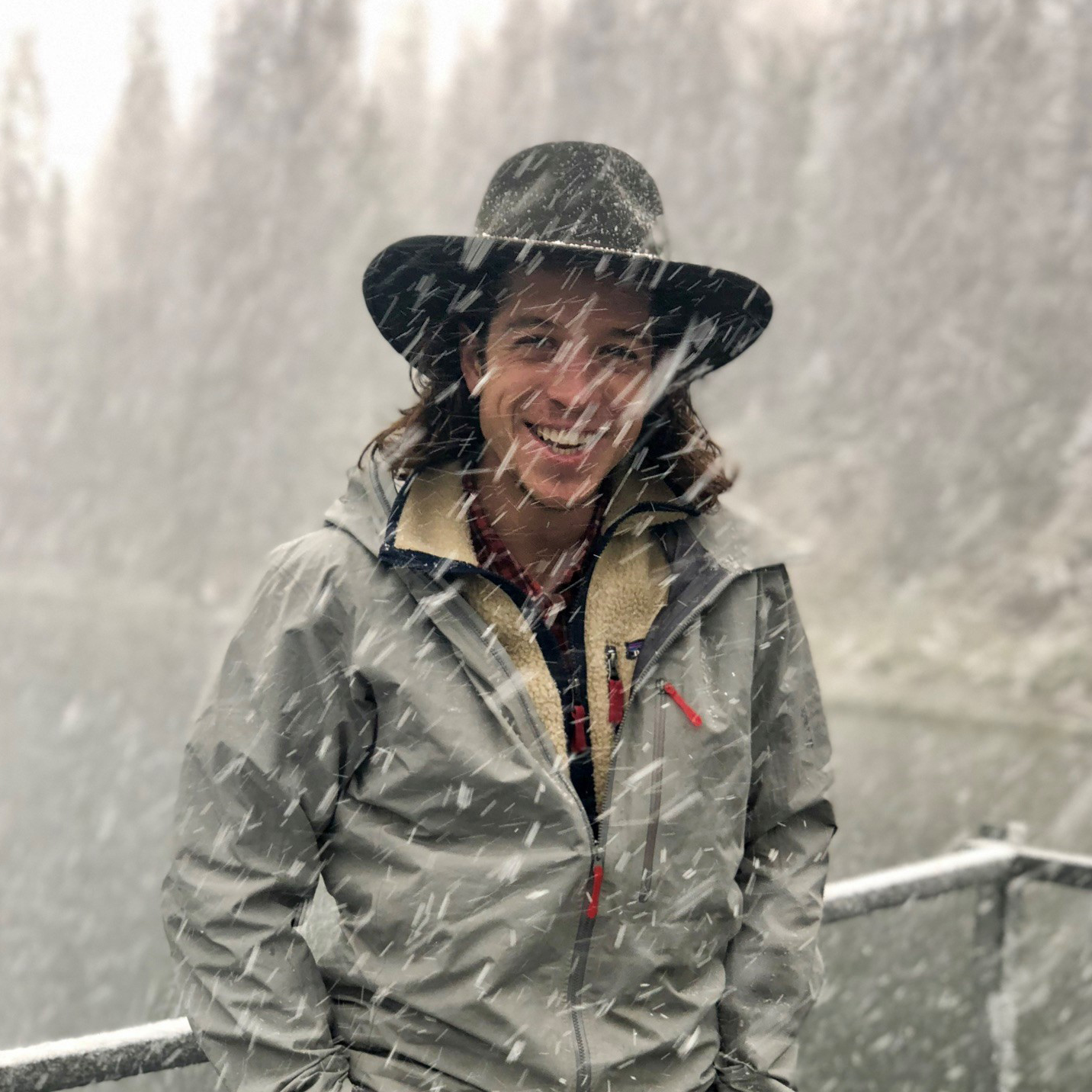 I’m an alpinist and writer based in Mammoth Lakes, CA. I’m fortunate to pursue a life of intense experience in the mountains, often with my best friends. I like high elevation running, technical climbing, windy bike rides, and strong coffee through it all.